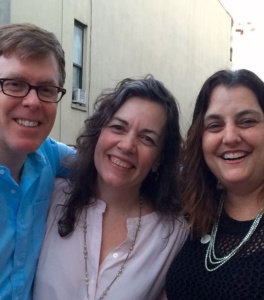 Ryan Gilliam has been working with young artists to make theater since 1988. Ms. Gilliam has directed over a hundred and twenty productions; additionally, she has written eighteen plays, two librettos, lyrics for several dozen songs, and adapted over thirty works of film and literature for the stage.

Ryan and composer/partner Michael Hickey have together created 11 original music theater works, half of them based on the history of the Lower East Side.

Ryan has been the Artistic Director of Downtown Art since 1992, before the company became a youth theater, and during which time several DTA productions were awarded OBIE and BESSIE awards, and the company received a Special OBIE Grant citing its support of young artists. Ryan was featured as a “New Yorker of the Week” on cable television’s New York One, and has been the subject of a half-hour documentary program – part of a series on New Yorkers – for Japan’s Public Television. She has taught theater at the Neighborhood School, the Earth School, and Tompkins Square Middle School. She has received a Bank of America “Local Hero” award and an ART/NY “Local Hero” award.  Ryan has a BFA from New York University and an MFA from the Yale School of Drama.

She serves as Chair of Fourth Arts Block (FAB), a membership of cultural and community groups that worked together to establish the East 4th Street Cultural District. Ryan is also a member of the Working Group of Naturally Occurring Cultural Districs/NY (NOCD/NY), a board member of the Alliance of Resident Theaters/NY, and co-chair of the steering committee of Lower East Side History Month.

Ryan led the campaign to purchase and transform a vacant dilapidated building at 70 East 4th Street into a cultural and community center, a project that has received commitments of $4.7 million in capital funding through the efforts of City Councilwoman Rosie Mendez, Manhattan Borough Presidents C. Virginia Fields and Scott Stringer, Speaker Christine Quinn, and the NYC Dept. of Cultural Affairs.